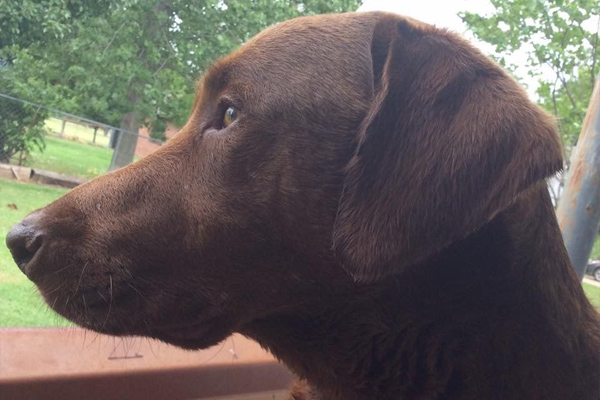 I want to first mention that my husband Ron and I were well aware of stem cell therapy years ago when we had one of our others dogs go through this procedure due to an ACL rupture. Gypsy had ACL surgery from a vet in Claremore but never seemed to heal up…she kept 3 legging it, so we took her to our local vet Dr. Joel Manley of Manley Animal Hospital. We tried laser therapy first and it didn’t help so Dr. Manley showed us a short video regarding stem cell therapy. I said I need to research this and then we will make a decision. After researching stem cell therapy Ron and decided to take the plunge and decided to be the first in our hometown to have stem cell therapy performed on a dog. Back then this procedure was more expensive, but Gypsy was still very young and we wanted her to have a life without pain. Back then a company by the name of VetStem in California was used. The fat sample from Gypsy was removed sent to VetStem overnight. VetStem extracted the stem cells and then forwarded stem cells back to Dr. Manley via overnight. Dr. Manley did his magic and injected the stem cells back into Gypsy the following day. Gypsy’s story amazed us, because by the next day she was not 3 legging it anymore. She healed right up and was able to run and play Frisbee for years.

We noticed that Reuben started limping one day early in 2017 on one of his front legs and thought maybe he had just stepped in a hole or played too hard with one of our other dogs. We watched him closely and tried to limit his exercise, but unfortunately this was kind of hard to do when you have 10 acres and he wanted to run and play. Reuben steadily got worse over the weeks ahead and was limping very bad…he never held the leg up but you could tell he was in pain. We were heartbroken any time we saw him limping.

We decided to seek vet assistance and it was determined to take Reuben to an expert in the field of arthritis in Tulsa, OK. He was put to sleep and had had x-rays performed. The vet said he definitely had arthritis and gave him an injection of cortisone in the elbow area and said that he should be contained or else his problems would worsen over time. After the cortisone shot, Reuben did improve, but it was only temporary and he still had a mild limp which eventually went back to a bad limp. We could not contain him and in our book a dog needs to run and play.

We decided to get a second opinion from a local vet Joel Manley. Joel said since it had been a while since his last x-rays in Tulsa that he wanted to do more x-rays and see how far advanced the arthritis might have progressed. The x-rays were sent off to an expert to read. After a week, the results were back and we were told he definitely had elbow dysplasia. It was recommended Reuben have an MRI to look deeper into the area. Dr. Manley wanted the MRI so he could determine if surgery to clean the area might have impact on helping his limp…Joel said it might or might not help. The MRI didn’t tell us anymore than we already knew and we were now out of a lot money and no hope as labs are prone to elbow dysplasia.

Dr. Manley then informed us that he would be training with a company called Medivet on how to perform the entire stem cell therapy in his office and that he was also ordering the equipment needed to extract the stem cells. He also mentioned the cost was drastically reduced from when we had Gypsy’s procedure, which by the way, was performed by Joel Manley as well. Dr. Manley knew we had great results from our previous dog Gypsy and said we would be first on his list to have the procedure done once his training was complete and the equipment set up. Ron and I decided to take the plunge again and go through with it. Reuben was still very young and had many years ahead of him and we just couldn’t take seeing him limp around in pain and know that his condition would only get worse as he aged. We didn’t care about the price, we just wanted Reuben pain free and we were confident the stem cell therapy would be the answer.

We did attend a class one evening that Medivet presented on behalf of Joel Manley. We found the class informative and had a chance to ask questions which was very helpful. During the class Medivet showed a video of a dog that was limping and the dog was limping EXACTLY like Reuben had been. I yelled out, oh my, that is exactly how Reuben walks.

Finally, we received a call from Manley Animal Hospital to schedule a date for Reuben to have the procedure performed. I was told Medivet was on hand to help Joel Manley with the first in office procedure. Reuben had his stem cell surgery the first part of October 2017.

Joel injected stem cells in all leg joints, just in case arthritis might pop up in those areas. The procedure was performed in just one day and we were so excited to see the healing begin. At first, we were disappointed, and the reason is, was because Gypsy had showed improvement almost immediately after her stem cell therapy. Weeks went by and Reuben was still limping, it didn’t seem like he was limping as bad, but he was definitely still limping quite a bit. Ron and I knew from the class that was presented and from some on-line research that sometimes it takes up to two months for the stem cells to take effect. FINALLY, one morning I noticed Reuben wasn’t limping…it was light night and day…I just wanted to cry because I was so happy. It did indeed take 2 months for the stem cells to do their magic and yes it’s magic. Ron and I were so happy to see our Reuben walking and running without any pain. To this day, Reuben hasn’t limped once. We also had some of Reuben’s stems cells banked in your facility.