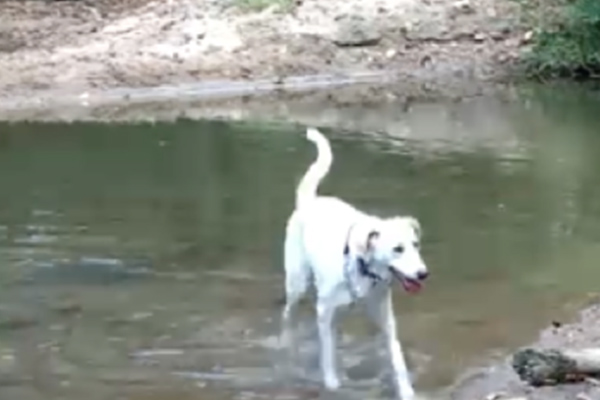 Smudge has had ‘the best of times and the worst of times’.  Smudge and her littermates were dropped on the side of a road on an island in the Bahamas, outside the gate to a very rudimentary animal shelter. (They do the best they can with what they have to work with but their resources are very limited.) As the runt of the litter and really too young to be away from her mom, the shelter gathered them up (no small miracle none were hit by cars in the time between when they were dropped and when the shelter realized they were there). Smudge (aka Puppers), was tiny—less than 5 pounds, in a litter of 8 puppies. I showed up to volunteer and saw the litter and the tiny pup who just looked sick—runny eyes, runny nose, bloated with worms, last to the food bowl, and lethargic. We saved her. Two weeks later she flew back to the US with us. Laden with worms, we treated her. She improved, and started to thrive as a normal puppy. At about 7 months of age, she started limping one day in the yard. We took her to the vet. After x-rays which showed nothing abnormal and a thorough exam, we thought she had simply pulled something and treated her with meds and rest. Unfortunately, the limping on her front legs continued intermittently and after more tests and meds, we decided to go to UGA Vet School. At UGA the first set of tests revealed a small bone chip in each front elbow. The clinic thought arthroscopic removal of the bone chips would solve the problem. Surgery was scheduled. The results of the surgery were very discouraging. Both the bone chips were removed but the surgery revealed that she had no cartilage in either elbow. Two options were offered: PRP injections to help reduce pain and inflammation or bilateral elbow replacement. After consulting with my regular veterinarian, and my own research, I decided elbow replacement was not an option. The technology was not far enough advanced for my taste, the surgery painful, the recovery painful and difficult, and each joint replacement required extensive sedentary confinement and had to be done consecutively. Not a desirable quality of life, so we decided to try the PRP injection.  The first injection was completed at UGA. The procedure was successful in that it did seem to reduce her pain for a short period of time. However, the results were fairly short-lived (less than the 45 days recommended between injections) and it didn’t eliminate it-just reduced it. About that time, my veterinarian suggested stem cell therapy, which was a much less invasive option. At this point, Smudge was on Deramaxx daily and had been for almost six months. The medication helped, but did not completely alleviate her pain and she did not have a normal quality of life. In January, we did her first stem cell injection (she was just over 1 year of age ( approx. 14 months).  Within 2 weeks she was a different dog. As the elbows continued to improve we were able to discontinue the Deramaxx. She, since the treatment, has continued the PRP injections every 45 days and she is a different dog. She can now run and play with her best friend in the yard, get up without whining and limping, go for walks, and be a normal dog. We have gone from believing she would have a very poor quality of life with a shortened lifespan to believing she will be able to be a ‘normal’ (recognizing that she’s a little goofy-so not quite normal) dog indefinitely. It is, without a doubt, a life changing treatment for her.