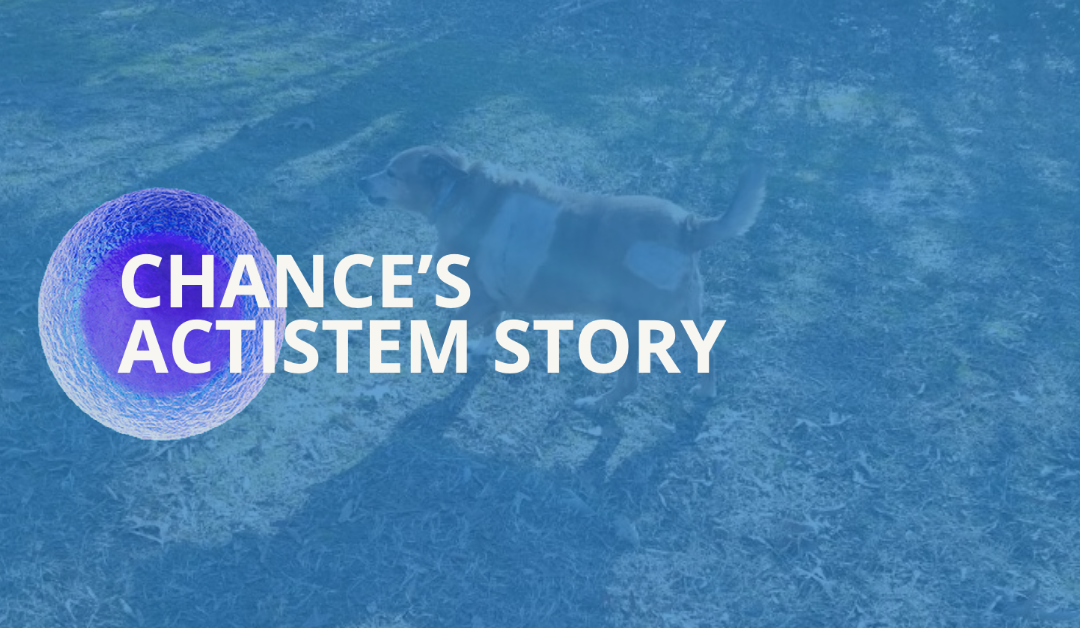 Chance is a mixed breed dog that our daughter found on the side of the road about 12 years ago, his mother had been killed by a car. Our daughter brought Chance home and cried, asking that we give him a Chance! Although Chance was malnourished and staggered walking, Chance was given a BIG Chance.  Chance continued to have some difficulty getting around and as the years progressed it was obvious that arthritis was causing more of a problem. Over the last year, Chance had become very inactive and grumpy due to pain, even though he was on pain medication taken orally and injections. In a recent trip to LaCrosse Animal Hospital, Dr. Dunavant and Leslie spoke with me about Chance being a candidate for Actistem Therapy. After listening to their explanation and reading about how it helped other dogs, my wife and I decided to have Chance take the treatment. This February, Chance was treated, and we were astonished at the remarkable improvement in his condition and ability to get around. Before, Chance had to have help getting up and down, but almost immediately after receiving Actistem Therapy he was able to get up on his own.  Prior to the treatment it was difficult to get Chance to go outside and do his business, he would limp down the handicap ramp and go just a short way into the yard and then either flop down or come back in, no walking around. Now he walks around all over the place and is back exploring the surrounding area and going with me on walks.  We live back off the road in a rural area, with a long driveway.

Yesterday, Chance was out in the front yard when the UPS Delivery Truck came unexpectedly. Chance did something he had not been able to do in some time, he ran and chased the UPS Truck. We are greatly pleased that Chance has more mobility now, and thankful that he is no longer in pain and whimpering. His disposition has also greatly improved! I would recommend Actistem Therapy to those with similar problems, and I know Chance would too!

Due to injury and/or age sometimes our own repair abilities can use a jump-start. By using the pet’s own repair cells isolated from fat tissue in the body, this repair ability can be applied to areas of need. Actistem Therapy is being utilized across the world to help pets in need. Interested in this therapy for you pet? Click below to find a Veterinarian near you offering Actistem Therapy!